A hanging bridge links the Tintagel Castle on the crumbled north coast of Cornwall. The ruins are one of the most spectacular historical sites in the United Kingdom. The road to the castle has long been a challenge for the visitors of the high city. Over a hundred steps lead to the ruins on the cliffs. The reputed architects have always found a solution for this, as they have built the newly constructed bridge as a pedestrian bridge.

Architectural firm William Matthews Associates and Ney & Partners have created a built-in hanging bridge of two meters high, protruding spans that do not quite meet in the middle. The Tintagel Castle Bridge is therefore a pedestrian bridge over a 58 meter high slope between two cliffs, which connected two sides of a medieval ruins to each other. All twelve steel sections of the new pedestrian bridge were installed on the railing of North Cornish. The fine alignment required for bridging the bridge is now closed. Both the lock and the hanging bridge have been available to the public since Sunday, August 11, 2019. For the first time, organizers have introduced time cards for the castle, which can be booked on the previous website in advance. It is still recommended, in advance, to reserve, in order to secure access to the desired time point.

In October, the work began on a roadmap project to reconnect the tiled landscape of Tintagel. In the Middle Ages, the occupants of one side of the railing went to the others over a narrow land bridge, which was as tall as the cliffs. The intersection disappeared between the 14th and 17th centuries and the castle was separated by a natural gap. The new suspension bridge represents the original route here again, and offers visitors the opportunity to experience the castle so that it has made its medieval inhabitants unique.

The relevant authorities in 2015 launched a competition to find the best team for the design of the new bridge. The winner concept created the above mentioned architects. The aim was therefore to find a special bridge on the Tintagel castle which was carved into the hanging bridges, which are situated in the iconic coastal landscape. The design features two recliners that touch and have a distance of 40 mm in the middle. This gap represents the transition from the mainland to the island, worthy of the past. The suspension bridge design is plastered with slates and along their length with stainless steel bristles. The bridge countries are so beautiful that they disappear from the distance in the sky. The architects provided a solution where no temporary scales such as scaffolding were required during the construction process.

Tintagel Castle have closed the public authorities in October 2018 because of the construction of the new bridge. Before that, they also had a cable crane installed, with the contractor to install the equipment and build the foundations. For this reason, no scaffolding was required. Prior to this work, the architects conducted a series of geotechnical investigations to ensure that the background could support this. At the time, when the cable crane was in operation, work began on restoring the steel profiles of the bridge outside the construction site. These finished steel profiles were brought to Tintagel Castle and put into position. Sometimes the team established the historical connection between the mainland and the island piece by piece again. 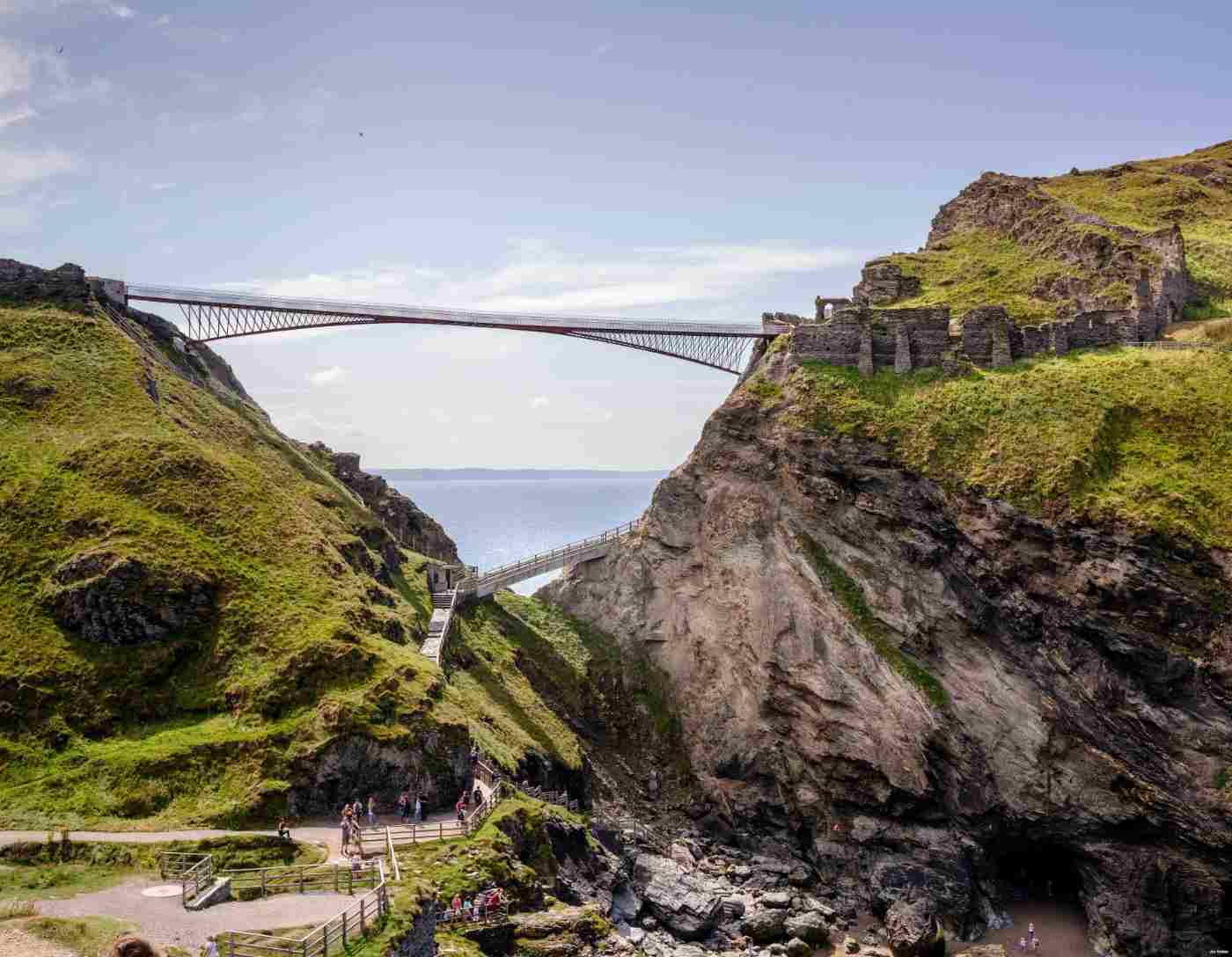 As mentioned above, the collar arms consist mainly of steel and local slates from the Delabole quarry. This is England's oldest working quarry, which is oriented vertically for the road. The handrails are made of oak. The footpaths on both sides are slate and quite rustic. The architects thought, first of all, that a very rustic conclusion of the bridge is not really appropriate. So they have taken the same material, but used it in a very fine and modern way and wise. The remote location on a cliff, the strong winds on the rails and the developmental constraints of historical and ecological significance made the re-connection of the two castles into a real challenge.

Both publishers built the contractor over a period of one year in Devon and transported it to Cornwall in 5-tonne pieces. Have a special cable crane used by engineers to position each section during screwing. For this reason, the assembly process lasted only two weeks. To anchor each side of the cliff, the specialists used ropes to hang over the edges and support the rock wall. It is a widespread method of stabilizing cliffs that you can see on highways in the Alps. It is, therefore, a pre-existing technology that is quite unusual in the United Kingdom.

An oncoming storm has delayed the official opening of the bridge, as the exposed island is uncertain in extreme winds. If visitors cross them anyway, they can get over a natural abyss that has not been overcrowded for 500 years. Before, visitors to the English cultural heritage had to ascend steep stages and had to settle for a much smaller pedestrian bridge at the foot of the cliff. The legend is still the place and the King Artus is received.