When we think in concrete buildings, when the gray color in general falls off, the colored concrete reads everything more vivid. The traditional blend of this building material usually includes cement, gravel, sand and water. It can still vary in color and color elements and of course with light or dark colors. The pigmentation of the concrete can exert on the aesthetic function. It can enhance the impression of a private home, contextualize a public building in its surroundings or even refer to the design concept. In the following, you will find a selection of construction projects in which colored concrete is optimally used as material.

Compounds that add to the pigments of pigment thus appear more frequently on and off their belts, since colored concrete is infused as a color with more stable shades. These colors result from the addition of Oxides: Yellow, Red. Your deductions, for example Braun, were obtained through the Zugabe von Iron Oxide. Chromium and cobalt oxide form the green in a way that is blue. For black concrete, usually black iron oxide and carbon oxide were used in combination with puzzolanic cement. 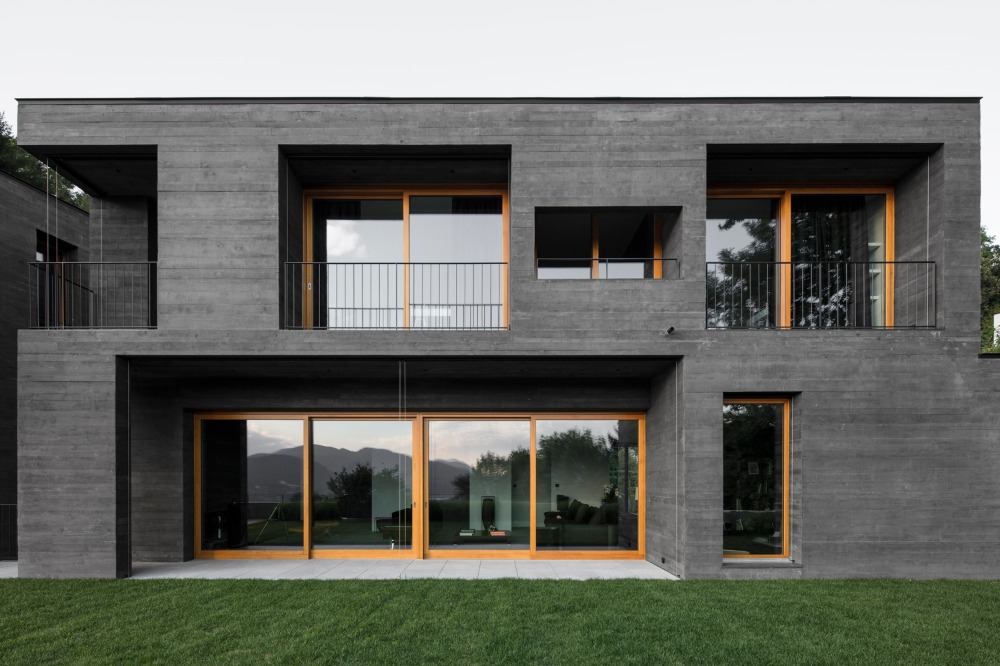 Our first example is our villa at Montagnola by Atillo Panzieri & Partners in Switzerland, which lies on a plot with a magnificent look on the Luganersee. The suggestive view and the prevailing presence of rock masses behind the railroad have presented the principles of the keeping of the entire commandment. The modern house looks on the rocks in a dynamic dialogue and extends simultaneously towards the sea. The intrinsic morphology of the locations and their southwest alignment to the sea have guided the designers' choice.

The building looks like a block of black pigmented viscous concrete. It is the black color that reigns from the rock and with the raw Bretterns, which extend in the same direction. This property lives up to the facade and emphasizes the interchange of full and empty openings. The light penetrates the openings, fills the interior of the villa and creates a warm and cozy atmosphere. Doors and windows made of natural oak reinforce this detail. The inner contrast between the White of the Push and the Black of Concrete creates suggestive games that are emphasized by these insights. 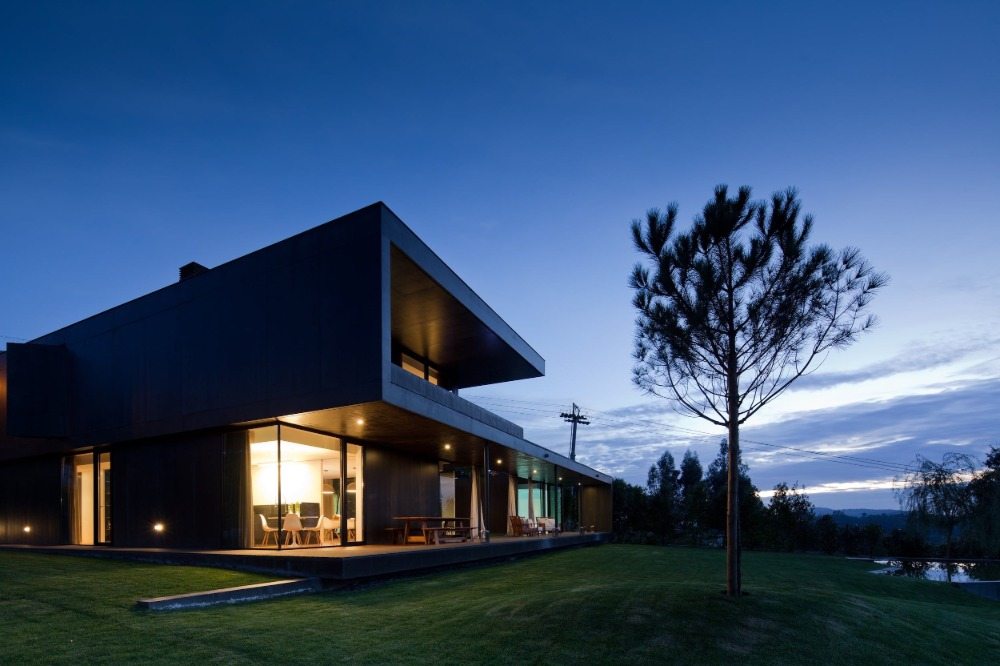 One concrete wall, which breaks out of the ground, limits the house designed by the architectural firm Pitagoras Group of Portugal in our next example. The wall still overcomes the different heights of the landscape. In relation to the materials used, a seemingly dark colored concrete defines the volume of the structure. As the cover material for some facade panels, the architects also chose the anthracite-colored zinc.

On the outside deck for the drive with the car, the designer has decided for the basalt. Wooden pallets overlap pedestrian pathways or residential spaces as an extension of interior floors. The exterior buildings consist mainly of black aluminum. The dressing had a significant effect on the entire picture of these houses, since this is fully visible from the entrance of the plot. For this reason, the architects have opted for a porous concrete cover to work on an absolutely uniform discharge surface. Somehow, this coverage even helps to understand the volume of the commandments when moving the occupants on the ground forward.

Red concrete as an accent

The suspended concrete volume in this case protects the residential areas in the earth with spatial deviations from the design of the plasters in different heights. The wooden floor connects the entrance to the pool and unfolds in the room. The concrete wall also supports the construction and divides the railing in a longitudinal direction. This results in independent areas for the device. The colorful block has the Brazilian architect UNA Arquitetos stained with iron oxide. The foreshadowing of the formed wall extends beyond the light reflections as well and follows a transition from outer to inner areas.

Two concrete columns complete the support of this plane and allow for obvious asymmetry in the regular structure. The contrast to the first stage, in which the sleeping room is located, is expressed in the decoy power of the volume. This indicates a certain intimacy, while this room conveys the view through weathering balconies. These blowouts provide a diagonal view, multiple light and ventilation openings, which also emphasize the sunset path. A winter garden finally rounds off the ascent to the roof.

The architects Mauricio Pezo and Sofia von Ellrichshausen from Chile have decided here to test the archetypal features of these suburban houses. This exercise was not as unequivocal as the beating, which required some formalities of the Falls: a suburban dwelling made of concrete in a quarter of single-family homes. They plant a piece that simplifies the silhouette of four inclined roofs, but never distinguishes them from the naïve outlines of a children's drawing.

It is a house as a local expression, which originates from the undisputed firmness of concrete structures, which was never alternate. The team built a secondary colored concrete wall, which was repeatedly altered and repaired in layers during the restoration. Every new layer the builders have over the former cast.

Both houses of the Spanish architectural firm Azpilicueta Arquitectura Y Paisaje were determined by the complex local geometry in two different forms. They elevate House M and House P as elements of a single material. Farbiger Concrete integrates the strong earring that speaks to the typical herbal design. The houses consist of solid walls and enclosed earthen clay walls, which are typical of the ancient architecture. In addition, it is also recognized that priority is given to the fact that the kitchen of the housing in the southern part has an ideal alignment.

The construction has the architects determined at the earliest moment within set budget limits. The houses consider these aspects of energy efficiency with a good energy qualification. The constructive system was created with the help of walls made of yellow-colored steel concrete in mass and in agreement with the sandblasting. Moreover, the panels of photovoltaic energy are added in the roof. The resulting texture has a double exterior appearance, which allows it to play with the contrast of richly experienced materials and good care and to reinterpret the constructive traditional system of "finished" walls. The pursued goals were the integration into the locality, the optimization of economic resources and the simplicity of execution.

The body of these buildings is recalled by the architects Gonçalo Byrne Arquitectos and the tactility of traditional medieval erection and presented raw textured surfaces, which through the use of pigmented red concrete come with raw and irregular human appearance and achieve a natural expression. The Texture of the Museum in Portugal has yet to strengthen the architects, by incorporating gray lines from slate plates into the horizontal joints of the building.

Overall, the building evokes a sense of gravity, almost like a sculpture dyed in their own tones and rebuilt at the time in spontaneous noble rust patterns and like a spotted vertical battle field between a small and a larger body. The combined use of concrete walls and a structure of concrete supports, beams and slabs allow for maximum surface use and the presentation of large exhibition areas.

Red concrete for the firefight

The Italian Studio Pedevilla Architects designed a minimalist, pink-colored building that serves as a firehouse for the city of Vierschach in South Tyrol. In the remote Pustertal built near the Austrian border, apparently plainly designed buildings are located on the main road. Although the design simplicity and detail improvement takes priority, the building is in reality an experiment for itself. The lightweight concrete shell requires constructive and static parameters, but also takes into account the requirements and the insulation. 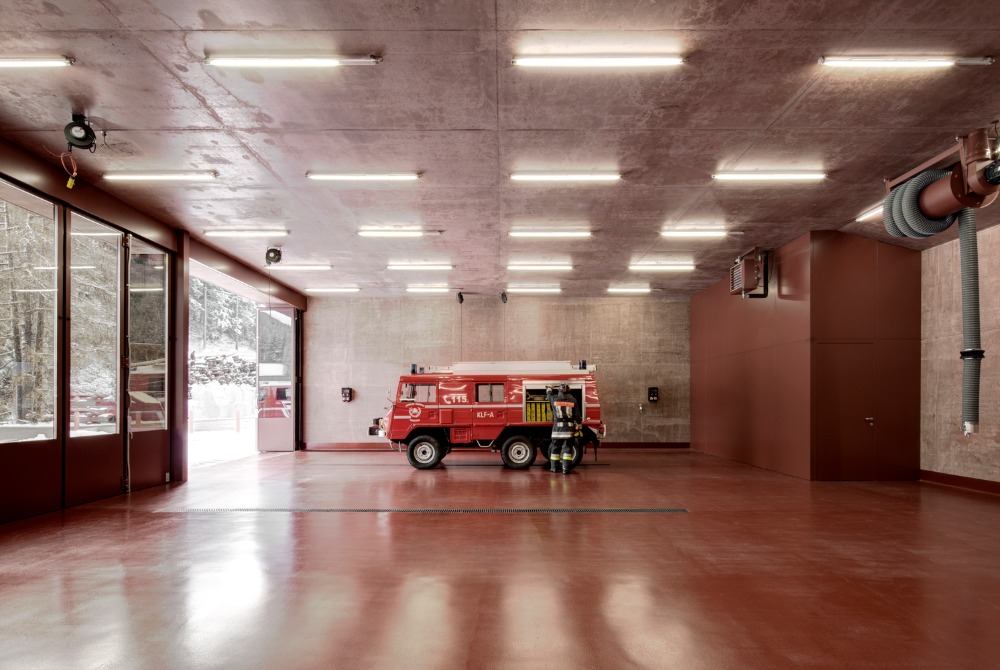 The red color underlines the originality of the new firefighter. Colored concrete is the building material for all surfaces. This underlines the monolithic character of the commandment. The dimensions of the construction remain recognizable from the outside, many reinforcing the huge appearance of the structures. The main feature of the project is surely the exterior shelving, which allowed the team to minimize the necessary work and construction and building requirements. Irregularities or deviations in concrete lend the material and the character of the commandments even more and more charm.

Yellow as a color for cultural buildings

An ocher yellow colored concrete represents the warm color of Bodens in this impressive Brazilian city museum of the architects Brazil Arquitetura. With a refined structure made of prestressed concrete, the architects have designed a large span of about 65 meters of light. Sometimes they have created a large, contemplated space, as well as some urban balconies. This is practically protected from the strong sun and the lowlands of the city. The considered place can be used in many ways, from festivals to fairs, from shows to nothing, to enjoy a good shade or look on the reefs.

The result is a building that, on various, sometimes subtle, sometimes blunt species, metaphorically contains the most important thematic axes. Cais do Sertão has offered its visitors a unique, unique experience, both intellectually and affective. In summary, they read that they are dealing with the concept of technique with poetics, high-tech with technically simple, rigorous and extensive content with the possibility of free interpretation and free enjoyment. It is a place for aesthetic enjoyment, and the emotion, surprise and discovery go hand in hand. A place of urban gentleness.

What are the colors of 2020 in fashion for the fall / winter season...

Training in Urlaub – So you can be happy with it and remain in...

Was bristlen with concrete? 6 instructions for easy and useful DIY projects