The ginger plant (Zingiber officinale) is grown because of its aromatic, spicy and spicy rhizomes, which are often referred to as ginger roots. Ginger is a popular ingredient in pan dishes, in Asian cuisine and for many homemade herbal remedies. The main active ingredients in ginger are gingerols, which are responsible for its distinctive taste. Gingerols are powerful anti-inflammatory compounds that relieve pain, strengthen the immune system, and protect against cancer. Ginger is easy to find in most grocery stores, but can be very expensive. If you use this delicious root very often, you can grow and grow ginger. This not only saves you money, it also ensures that your ginger has not been treated with unwanted chemicals. In the following article we tell you everything you need to know about growing ginger.

Can you grow ginger in Europe?

Ginger is a tropical plant and it is quite difficult to grow it in regions with a cool climate. According to the hardiness zone map, ginger can only grow all year round in zone 9 or higher. Most of the ginger sold in our markets has been grown in southern China, India, Indonesia or West Africa. Most areas in Germany, Austria and Switzerland are assigned to hardiness zones 6-7. 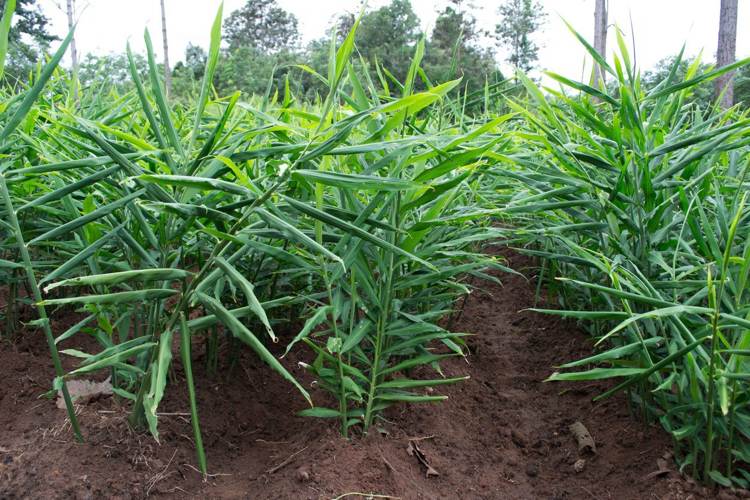 In Germany, only the coastal region of Lower Saxony and Schleswig-Holstein and the Rhineland fall into Zone 8a. That is why ginger is usually not grown outdoors, but in pots and flower boxes. If you want to grow ginger in the greenhouse, you should pay attention to the perfect conditions: 26 ° C floor temperature, a humidity of 70%, 20 ° C during the day and at night.

In order to achieve satisfactory results with ginger, it is necessary to know the special needs of the plant. Ginger loves a protected place, indirect sunlight, warm weather, high humidity and a nutrient-rich, moist soil. What ginger can't stand is frost, direct sun, strong wind and too humid soil.

How to pull plants from the ginger bulb

Growing a ginger plant yourself is not that difficult. The best time to grow ginger is spring, around April (late dry season / early rainy season in the tropics).

First of all, you need a healthy, fresh rhizome. It would be best to get some fresh rhizomes from someone who is already growing ginger. Otherwise, you can just buy ginger in a shop in early spring. Look for pieces with well-developed growth buds, still called “eyes”. The buds look like little horns at the end of the “fingers”. If you buy ginger in a shop, soak the rhizomes in water overnight as they are sometimes treated with a growth inhibitor.

The best soil for ginger is loose, loamy and nutritious. Loamy soils allow the water to drain freely, preventing the rhizomes from getting wet. You can also mix compost and potting soil in equal parts. A thick layer of mulch can also provide nutrients, keep the soil moist, and control weeds.

Choose a wide, flat container. Ginger roots grow horizontally, so width is more important than depth. It is best to use medium-sized pots that can be easily moved. 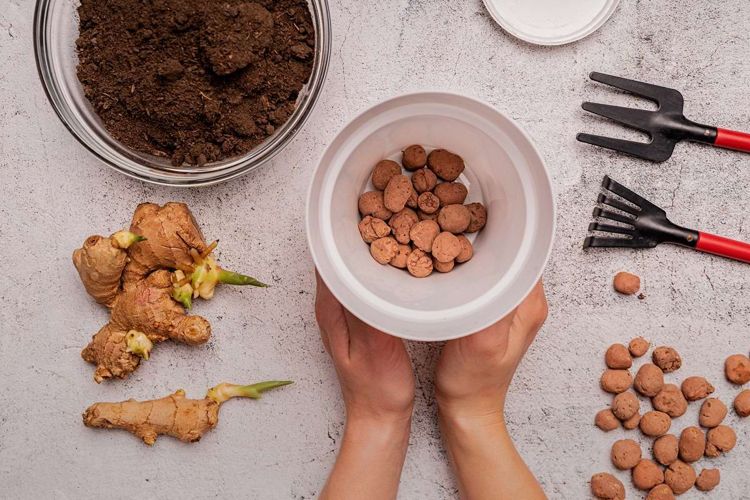 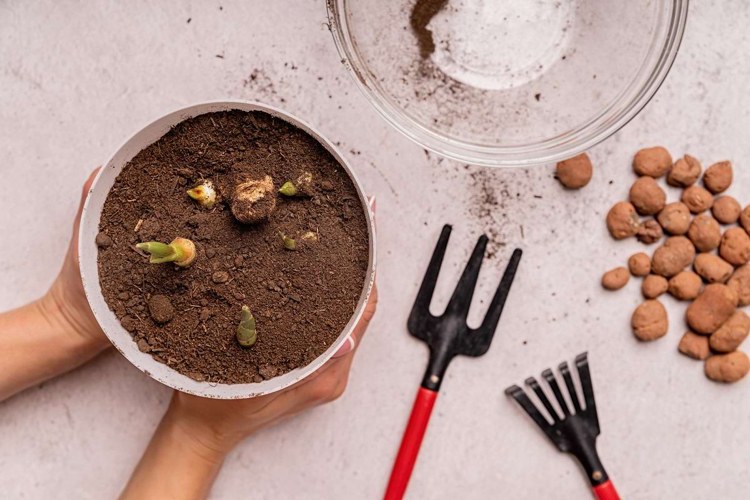 Ginger prefers a place with a lot of light, but no direct sun – ideally in partial shade or on an east-facing balcony only with morning sun. 2 to 5 hours of sun exposure are optimal. In the garden you can put the pot in the shade of a tree or an awning. He will also feel very comfortable in a greenhouse or conservatory. For the ginger to germinate, the earth must be warm – soil temperature between 22 and 25 degrees. You can also cover the pot loosely with transparent film.

How much space does ginger need?

Ginger in a pot doesn't take up much space at all. Each rhizome that you plant initially develops only a few leaves. Ginger grows slowly and is only 60 to 90 cm high. Many of the roots appear above the earth, which is natural for this type of plant. The underground rhizomes don't seem to mind if they sit a bit crowded.

By the way, ginger is also very pretty as a houseplant. It has shiny, broad-lanceolate, green leaves and also smells wonderful.

Growing ginger – how much water?

Ginger needs a lot of water while it is actively growing. The floor should never dry out. Always avoid over-watering. You can water intensively once a week.

Ginger loves moisture. If you have problems with dry air, spraying regularly can be helpful. Dry air can cause problems with spider mites. This is often a problem for people who want to grow ginger in a cool climate zone or indoors. Ginger is also prone to diseases and pests such as aphids, ants, caterpillars, snails, wilted bacteria and fusarium fungus. 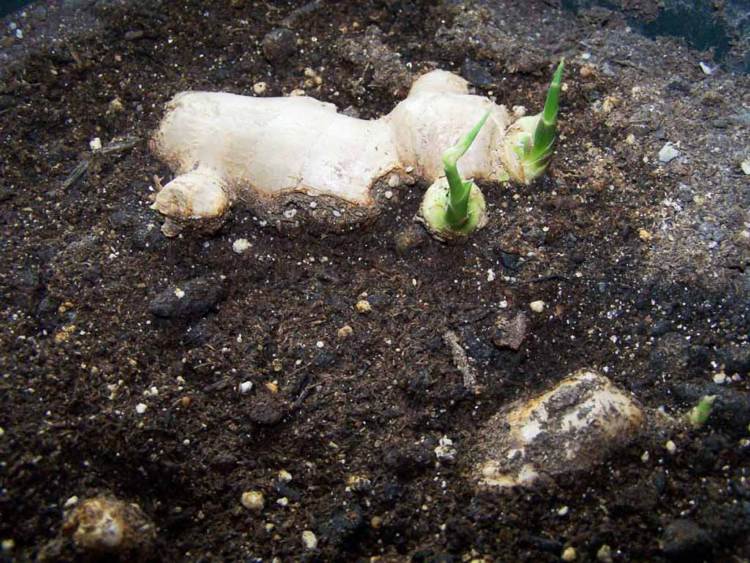 In late summer or early autumn (around September), when the weather cools, the stems turn yellow and the plant dies. Reduce irrigation and let the soil dry out. This will encourage the plants to form underground rhizomes. Once all the leaves have died, your ginger is ready to be harvested.

When to harvest ginger root?

You can harvest your ginger after four months, but the taste won't be as intense. After about eight months, your ginger plant will be ripe. As soon as the outside temperature drops below 10 ° C, you should place the plant indoors.

Ginger can be harvested by digging out the entire plant including its roots. After harvesting, choose new rhizomes to transplant and keep the rest for the kitchen. Unpeeled, the fresh ginger can be stored in the refrigerator for up to 3 weeks or frozen for up to 6 months. The rhizomes that have been replanted do not require water or maintenance until the weather warms up again. 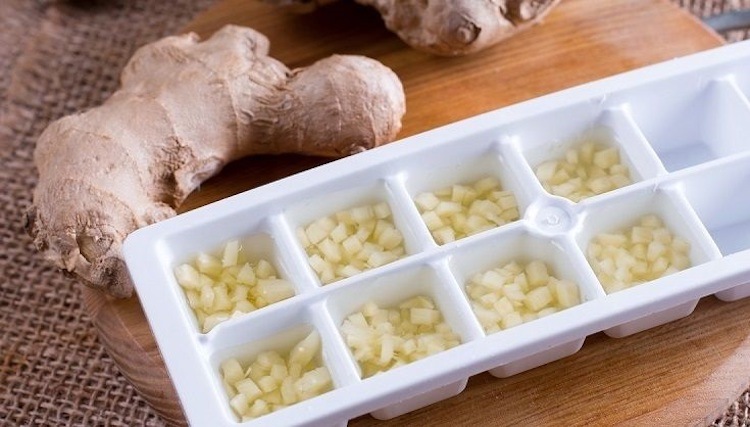 When does ginger bloom?

If you grow ginger as described above, you will not see any flowers. The ginger plant must be around two years old to bloom. So if you want to see ginger blossoms, leave the roots in the ground and just dig them very carefully to harvest something from the edge only.

In order for ginger to mature and bloom, it must grow at temperatures of at least 10 ° C for 10 months. From this point on you need several months in which the temperature is always above 21 ° C. This allows the ginger rhizomes to ripen and produce flowers.

The flowers of the ginger (Z. officianale), which is used for culinary purposes, are green and insignificant anyway. However, there are some spectacular flowering ginger varieties such as Zingiber spectabile, Alpinia purpurata, Etlingera elatior (torch ginger) and Hedychium coronarium (butterfly lily). They are grown just like culinary ginger, but the roots are not harvested.

Although not used as often as the root, the leaves and shoots of ginger are edible. They are mainly used as a tasteful decoration, much like you would use chives or spring onions. Finely chop the leaves or shoots and sprinkle them over the dish before serving. They have a mild ginger taste.

The flowers of the torch ginger (Etlingera elatior), especially the buds, are also edible. In Malaysia, they are used to flavor soups and curry dishes. The Malaysian word for ginger flower is Bunga Kantan. It gives many iconic Malaysian dishes their distinctive taste: Asam Laksa, Nonya Laksa, Asam Pedas, Nasi Ulam, Nasi Kerabu and the numerous Kerabu salads. 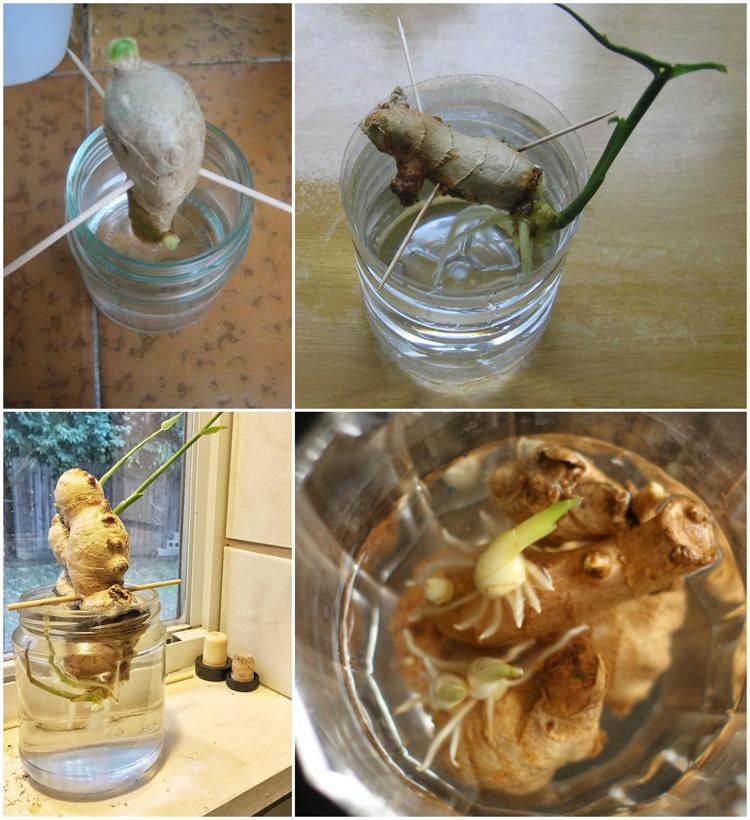 As already explained, the plant is usually cultivated in the soil, but can also be grown hydroponically. Indeed, growing ginger in water has advantages over traditional growing. Hydroponically growing ginger plants require less maintenance and less space.

First, a piece of the rhizome is germinated in soil and later placed in a hydroponic system. You need about 3 x 3 cm growing space per plant. The tub in which you place the plants should be between 10 and 15 cm deep. You can also try IKEA's hydroponic system called “Växer”.

It is also possible to hold a slightly sprouted piece of rhizome in a glass or container with water. It will continue to grow and produce leaves. Change the water as needed.

The post Ginger growing and growing: How to pull plants out of a bulb! appeared first on Deavita.com | Living ideas, design, hairstyles, make-up, lifestyle, health and beauty tips.

Bubble braids are the trend hairstyle that all women should know: Instructions and the...

Paintgalaxy is the coolest place in Berlin