Sometimes it is not possible to go outside with the children. During the current corona crisis, people are restricted in many federal states. But bad or very cold weather can also prevent us from doing so. Then interesting indoor games are required! We want to give you some nice ideas for playing with kids at home that you can even use as birthday games. So if you are planning an indoor party, you can use our children's play ideas wonderfully!

What can you play with children at home?

If the board games at home have become boring and you are looking for games against boredom, you can think creatively and thus come up with numerous possibilities with which children can be occupied. But since not everyone is creative, a few suggestions are a welcome thing. We show you great ideas for playing with children at home, for which only a few everyday things are needed or even nothing at all, so that they are perfect for spontaneous play afternoons.

If you are looking for games for 3 year olds and older, this idea is great. All you need is some arbitrary objects with interesting shapes (e.g. children's toy figures) that you place in front of a piece of paper so that the shadows fall on the paper. You can already play this simple game with children at home. Since it is a childrens' activity at home, you can either find enough light at the window (if the sun is shining) or use a lamp that you can conveniently put in the way that suits you best. 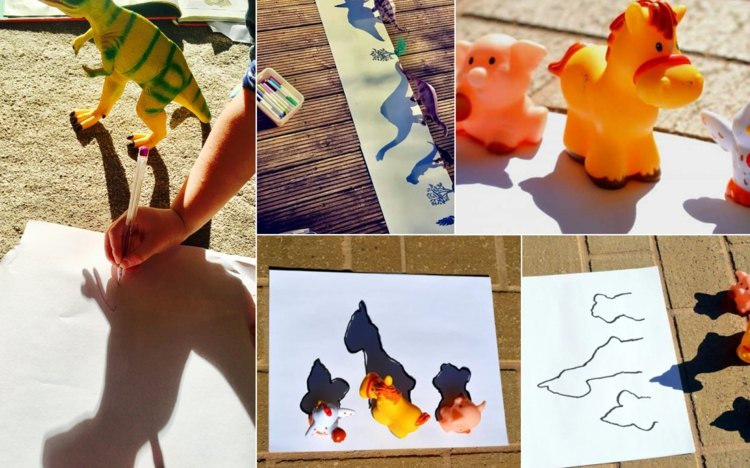 Then the little ones trace the outline of the shadow. Once you're done, take the figure away and leave the self-drawn outline. You can also make the game more interesting by letting each child draw separately without being able to see the characters of the others. At the end they have to guess what has been drawn on the picture. This is a great variant for games for a child's birthday.

Games for 2 at home – cheese box

A game that both children and adults like is the good old cheese box. If you are looking for children's games from 4, you will get a really great idea. A simple checkered sheet of paper from the math book and two pens in different colors is all you need and you can start playing cheese boxes with children at home. Everyone takes turns tracing one side of a square. You have to try to frame an entire square completely with your own color. The other one of course tries the same thing and at the same time tries to prevent the other from doing so.

If you have framed a square, write an “X” in it to mark it. In the end, everyone simply counts, their boxes and of course the one who has achieved the most wins. Children's games of this kind are also a great way to let the little ones come down and calm down after a more active activity for children such as sports at home or romping around.

Tip for playing with children at home: If you don't have a checkered sheet, simply draw dots at equal intervals on a white sheet and connect them with the colored pencils. Or how about a giant cheese box on large paper on the wall?

Games for children from 2 – dance game

All activities related to dancing are great for the little ones too. So if you are looking for games for 2-year-olds, you can try out the following dance game: Switch on the music so that everyone starts dancing. After a few seconds, you suddenly switch off the music and all children must immediately stop in the position they were in and stop moving until the music is switched on again. If this gets too boring, you can also ask the children to take certain positions when “freezing”, such as:

Especially such variants for poses are super suitable if the children's games are to be from 2, because the little ones not only learn about different movements and positions, but also have to remember them and execute them as correctly as possible. The balance, concentration, memory and also coordination and motor skills are super promoted.

Divide the children into several groups of at least 2 people (better a few more). A bag or bag containing various household items (cutlery, mop, sock, an empty bottle, etc.) is prepared in advance for each group. Players are now given 15 minutes to come up with a funny sketch. The objects contained in their bags should be used and serve as inspiration.

Skits are more for older children. So if you are looking for games for children aged 10 and older, the idea of ​​playing with children at home could be wonderful.

What to play with children – heaven and hell

Just an outdoor game? Are you kidding me? Are you serious when you say that! Heaven and hell are also suitable for indoors. Of course, you shouldn't use chalk to draw on your beautiful parquet. However, you can mask the field with ordinary painter's tape, which can be easily removed later. Can you still remember how the game is played? If not, here are the instructions for this kind of exercise games for children:

Play with kids at home – hide and seek 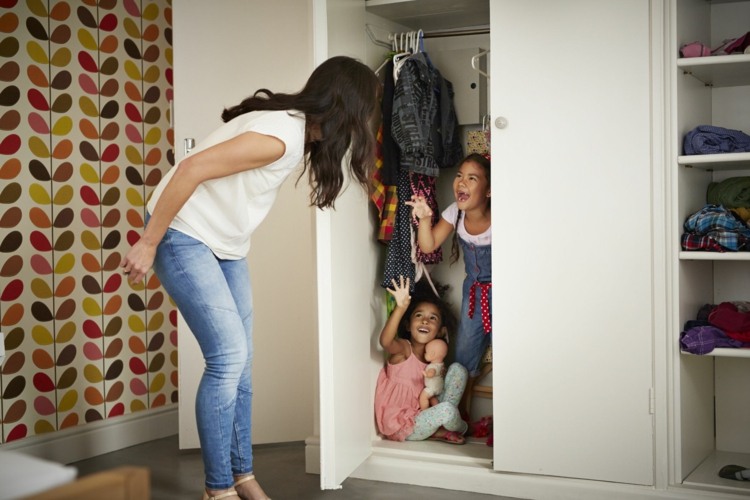 Playing hide and seek with children at home? The good old hide-and-seek game should not be missing on any list, because it can be played no less indoors than outdoors. An apartment or house can even offer great hiding places. Hide-and-seek games are great children's games from 5 and can also be played with a flashlight in the dark for even more fun. If you live in a large house, it is best to agree on a specific area to play in.

You can also play hide and seek with a toddler, just in a simpler variant and without having to knock off – just search and find. If you are hiding from the toddler, help him or her a bit by searching by calling or making noises from time to time (as with Marco Polo). 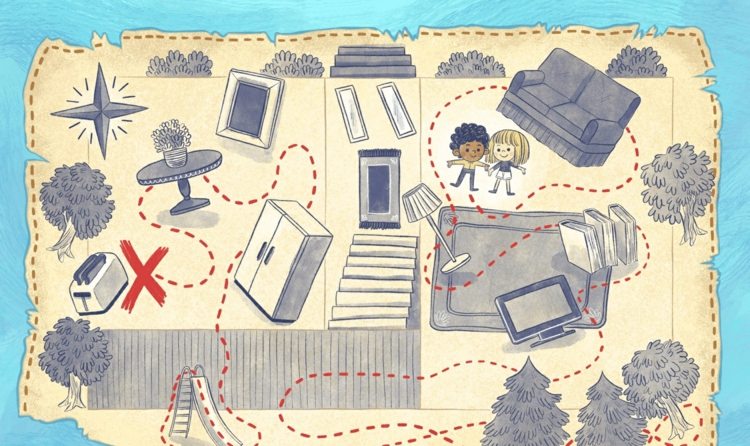 A little more preparation requires a treasure hunt, but there is no doubt that such games for home are just great. Hide a “treasure” somewhere in the apartment and then draw a map that leads there. Depending on the age of the children, a treasure map may be sufficient. If the games are to be for 5-year-olds or older, you can also integrate puzzles and make the treasure hunt even more exciting. The so-called escape room game for children is very popular and is based on the same principle.

A similar variant of playing with children at home is scavenger hunt. Write down items that you previously hidden on a list. The children then have to find them all.

A typical travel game that can also be played on all other occasions and promotes the memory: “I pack my suitcase and come in …” or “I pack my picnic basket and come in …” – in turn everyone names an arbitrary object, but must also mention all of the above in the same order. Who will be the first to mess up and drop the order? As a precaution, an adult who does not play along can also note down the things mentioned in case someone gets confused.

If you play this game with children at home and choose any situation (for example, instead of a suitcase or picnic basket, a school bag, a backpack for a hike, a shopping basket in a supermarket, etc.) is also suitable.

Place various objects in front of the children and let them watch them for a while. Then put the objects away and you can start playing the game with children at home: one of the children must now close their eyes (alternatively they can be tied), whereupon you take one of the objects shown and make noises with it . The player must then guess which item it is.

This variant is a bit too easy for older children. Therefore, you can make this type of game a little more complicated for 6 year olds or older by not showing the selected items beforehand. Suitable objects and what sounds you can make:

Ideas for children's birthday with feelings

A similar idea for playing with children at home is the feeler game. Put any objects in a container and cover it with an opaque cloth. A child then has to reach into it, grab an object and guess it by touching it. Only after the child has made a suggestion can he pull the object out and show everyone to check whether he has guessed correctly.

Games for toddlers with soap bubbles

Games for children with soap bubbles are a hit at any age. Yes, even adults love them! And since they don't get dirty and the soapy water can be produced quickly and easily, you can play with soap bubbles at any time and spontaneously with children at home. Put a drop of dishwasher and then water on a plastic plate (or other non-breakable container). Mix the two carefully until a few bubbles appear here and there. Now the children can blow into the water with straws (but be careful!). This creates small bubbles, some of which will surely rise into the air.

If you want a quieter occupation, you can't go wrong with painting and drawing. Such a symmetry drawing would be a great variant. You can print out any motif (or draw it yourself) and then simply cut the paper in the middle. You can then use the left side for right-handers and the other for left-handers. Then glue half a picture onto a white one, so that there is still space for drawing on the other side and the children then have to transfer it to the other side. A mirror can also be used for this.