A bioluminescent lamp is no longer an oddity these days and, as a novelty, presents many technical challenges. Vivid light from plants, fireflies, bacteria and other luminous creatures could change the way we illuminate our cities, fight cancer and toxins in our water Find. From the dark screen of a cell phone to the lighting of a stadium, artificial light is a hallmark of human technology. It is no coincidence that a light bulb symbolizes a brilliant idea and innovation. Nevertheless, the lighting of houses and cities in Europe has had a major impact on energy consumption. For this reason, designers and scientists are trying to integrate this technology into everyday life.

In such a light body there is liquid with phosphorescent organic cultures that can live for years. The light only appears when the liquid moves through a biochemical reaction that requires oxygen. Light is generated by rotating the object clockwise. Thus turning turns on the light, and turning it off in the opposite direction. The nature of light is cold in teal color, and the illuminator does not use any additional energy source for lighting. Not every lighting therefore has to be associated with a high electricity bill. Some entrepreneurs have turned to nature to mimic natural light. Some animals and bioluminescent mushrooms create it through chemical reactions in their bodies.

While beach tourists can marvel at the occasional glow of luminescent water at night, the phenomena occur regularly in the animal world. In fact, more than three quarters of marine animals and many species of land are capable of bioluminescence, including fireflies and phytoplankton. Other organisms use it in symbiosis, like the famous deep-sea frogfish, which swallows bioluminescence bacteria to glow and attract prey.

In contrast to fluorescence, the bioluminescent lamp does not require any external light sources. The light is actively generated by internal chemical processes in the organism. This means that such a device does not require any energy. As a result, no CO2 is released above the regular physical metabolism of the organism. Could the bioluminescent lamp that glows with the help of marine plankton serve as energy-efficient, sustainable light?

The above question inspired the original idea of ​​the new French foundation Glowee. The company developed a lighting solution by genetically modifying coli bacteria with DNA. The researchers found this in luminescent Hawaiian dwarf squid. The resulting bioluminescent lamp, glow sticks and other forms of lighting work essentially like a living aquarium made with bacteria. Since its founding in 2014, the company has been able to extend the lifespan of the bacteria and therefore the lights themselves from three days to one month. In the meantime, Glowee presented its technology by opening a “Glowzen Room”. Visitors can relax under the faint turquoise lights that are reminiscent of deep oceans. While Parisian laws are strict to keep the nights dark, the startup was allowed to put the French capital in a soft glow driven by squids with public light installations.

While the French company may be on the road to success, the entire commercial bioluminescent lighting industry is still in its infancy. Beyond Glowee, the industry landscape is just a collection of online shops for home improvement sets for growing bioluminescent algae and for early-stage research and development projects. In nature, bioluminescence on land and at sea has developed independently at least 40 times. In the economy, however, there seem to be more obstacles to commercial goals. While industry skeptics may be right, people shouldn't forget that the lighting industry traditionally doesn't evolve technologically quickly. According to an EU directive, old-fashioned lightbulbs have been disappearing from the shelves in Europe for around 10 years, most of which have been replaced by newer LED lights.

How exactly does a bioluminescent lamp work? 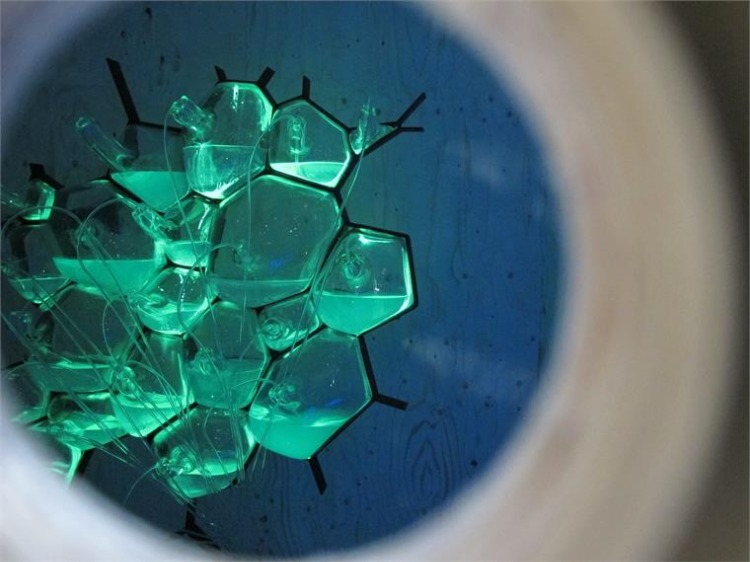 Bioluminescence is the emission of visible light that is emitted by living species. It is primarily a marine phenomenon where 90% of the animals that inhibit the top 2 km of sea water may be luminescent. In the country, there is bioluminescence in some fungi and one type of insect. The light is a result of a chemical reaction by an organism through reaction between luciferin and oxygen. The so-called luciferase then catalyzes this reaction accordingly. The light in the sea is concentrated in the blue spectrum. Most organisms emit light between 440 and 479 nm. This blue-green light is best transmitted in the sea, which is why most marine organisms emit this spectrum.

Luminescent bacteria do not produce light if their cells are widely distributed in seawater, but the culture in the medium generates light very efficiently. A proliferation of a single cell organism can result in thousands of others, depending on the space and conditions. After growth, the culture becomes stable. The phosphorescence emits 103-104 photons / s, the light is blue-green with a wavelength of 490 nm. To generate light, the liquid should also be aerated. The bioluminescent lamp does not use an additional energy source for the lighting. Their light is created by the circulation of liquid. As mentioned above, the glow is activated by turning the object clockwise. The process continues as long as the liquid is in the upper part for a long time. The light goes out when the filament rotates in the opposite direction.

This type of lighting cannot replace conventional lighting systems. So this is just a complementary light source. The nature of this light is cold and does not give off heat. The reaction product is 100% light, in contrast to a light bulb that loses 90% of the energy when it is warm and only 10% when it is light. In contrast to the light bars that light up when the reaction starts, you can stop and reactivate the bioluminescent lamp. The appearance of the illuminator symbolizes many means of the same process and the nature of the medium. The lighting is clear and simple during the day, while it looks magical at night because the bioluminescence is natural. Although the object itself does not move, the interior has its own cycle of movement, as is the case in nature as well as in the sea.

As an effect, the bioluminescent lamp moves the shadows and conveys a feeling of things moving through the interior. For example, the Dutch designer Teresa van Dongen filled a glass tube with octopus bacteria to create such a lamp that glows blue in the event of malfunctions. She also wanted to emulate the natural phenomena of bioluminescence waves. Her idea was to use this effect to create a lamp that can be activated by movement and not by electricity. She calls it Ambio. Although there are many different types of luminescent microorganisms, Van Dongen has chosen one that can be scraped off the skin of an octopus. In collaboration with two students from the life science department at TU Delft, the designer has produced a prototype that includes a tube made of artificial sea water. She then hung them between two brass weights.

Use bioluminescence in street lamps 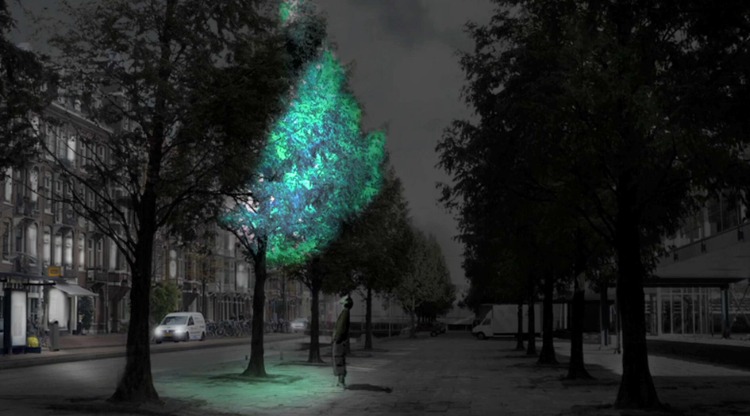 A long-planned application of bioluminescence is to replace conventional street lamps, illuminated traffic signs and interior lighting with electricity. One way to do this is by splicing genes from bioluminescent fireflies and marine bacteria into trees. Tree leaves soak up sunlight during the day to provide energy at night. Theo Sanderson, who is working on this idea, says that glowing leaves could be switched on and off by tinkering with genes that control the circadian rhythm of the plant – the trees would “go on” at night and “go out” during the day. You would then only need air, water and soil nutrients to maintain urban lighting.

As a student at the University of Cambridge, Sanderson worked with a team that was studying such a concept. The team developed a genetic entity that can be inserted into other life forms to trigger bioluminescence. The researchers transplanted bacterial genes into the chloroplasts of a tobacco plant and let them glow weakly by themselves without having to pump in fresh luciferin to maintain the reaction. However, the biggest challenge for the actual use of plants as light sources will be to increase the brightness. This research group had the problem when they made a bubble lamp out of modified, luminous coli bacteria (E. coli). 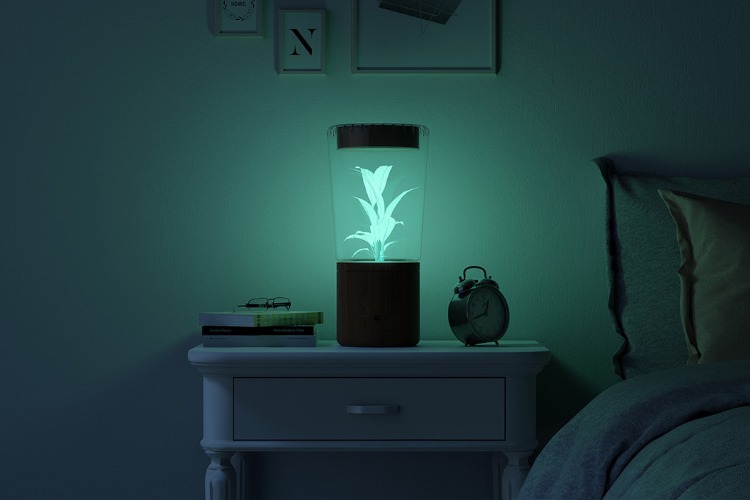 Nevertheless, between Thomas Edison's invention of the light bulb in 1879 and the EU ban in the early 2010s, the basic light bulb design was remarkably similar. Compared to the constant disruptive development of cars since horse-drawn carriages in Edison's time, the front lights have hardly changed. Europe may be light years away from feeding fluorescent bacteria to illuminate houses or streets. Because European leaders are tackling climate change, they need smart solutions. In an industry that represents good ideas, innovations for the biological imitation of natural light should not be quickly discarded.

Ideas for the home office – creative suggestions for...

Ideas for the home office – creative suggestions for a relaxed...

This is how long the corona virus survives on different surfaces