Alcohol and medication: side effects depending on the type of medication & lists of prohibited substances

Are you taking antibiotics but are invited to a party? Or have you just taken an ibuprofen but would like to end the evening with a glass of wine? Does the regular intake of antidepressants mean that you can no longer drink alcohol from now on? These are all questions that everyone has probably asked themselves at one time or another. Because it is nothing new that alcohol and medication do not go very well together. 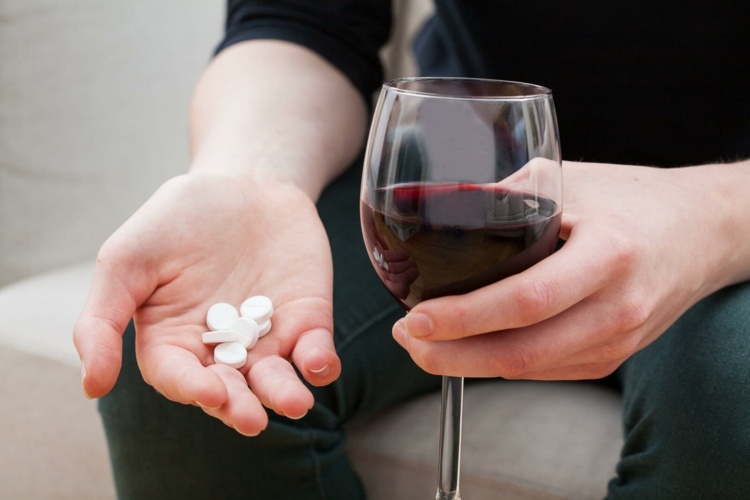 But does that apply to all types of medicines or only to prescription drugs? What happens when you mix medication with alcohol, what effects and consequences are to be expected and in general – what should you watch out for if you take medicine and want to drink? We have summarized the most important information for you, as well as some lists for drugs that are particularly dangerous in combination with alcohol. 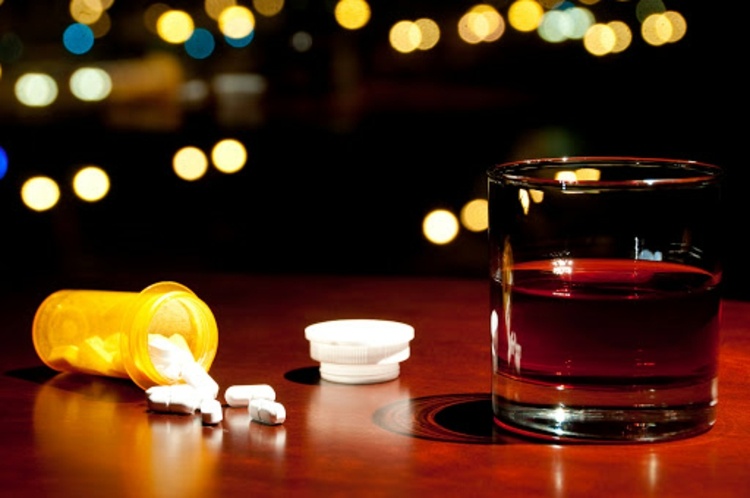 Many medicines should not be combined with alcoholic beverages, and for good reason. First, they can interfere with the effects of medicine. This is by far not everything. While some drugs combined with alcohol are more uncomfortable than dangerous in a direct sense, others can seriously affect your health and even your life. Possible side effects are:

Important to know is that not only prescription drugs and alcohol are a dangerous combination. Over-the-counter remedies and even those based on plants and natural herbs can be dangerous with alcohol.

Women and the elderly

Special care is required for women and the elderly. The reason for this is that women's bodies contain less water. Accordingly, the concentration of alcohol in the blood increases faster than in men and also the effect on the medication taken or the damage that could possibly occur.

In turn, the risk for older people increases mainly because they usually take more than just one medication. If the body reacts negatively to the combination with alcohol, there is also a greater risk of accidents from falling (as a result of dizziness, for example), heart problems and other complaints. In addition, one should not forget that the older the body gets, the more difficult it is to break down alcohol.

Below we have compiled some lists of the most common types of medication and active ingredients depending on the symptoms or illness. In addition, we explain the possible side effects when you mix the respective medication with alcohol.

Attention: The listed agents are only a small part of all drugs that pose a risk in combination with alcoholic beverages. This means that those not listed cannot necessarily be classified as harmless.

Alcohol and medicines for colds, flu and allergies

“It's just a cold, so the prescription drugs won't be as strong. A wine or whiskey shouldn't be a problem. ”Whoever believes this is wrong, because as already mentioned, even the lightest medicine made from simple herbs should not be underestimated. Medicines for colds and flu are usually used for several symptoms at the same time, make you sleepy and can also cause dizziness. Even paracetamol and alcohol should be avoided if possible, or at least drink alcohol in moderation afterwards (not more than one beer).

While this is not dangerous in itself, it can affect your everyday life and increase the risk of accidents, especially if you combine alcohol and medication of this kind. It affects your driving ability and the ability to operate large and dangerous machines. In addition, the combination affects your judgment, which in turn favors an overdose. Risky drugs are:

Alcohol and medicines for cough

As with cold and flu medications, cough syrups and other cough medications can cause drowsiness and dizziness and impair motor skills, which can be exacerbated by alcohol. You should not combine the following in particular with him: 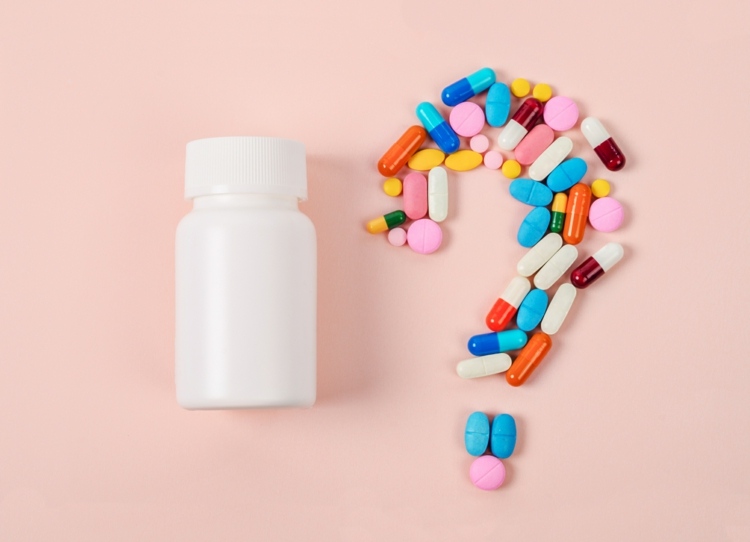 What happens if you take antibiotics and drink alcohol? Most people know that this interferes with the effects of the antibiotic. This is also the case with penicillin and alcohol. But that is by no means the only possible consequence. The combination can also have a negative impact on blood pressure. There are also rapid heartbeat, stomach pain and vomiting, headache, bleeding and even liver damage.

However, this only applies to some antibiotics. There are also those who tolerate small amounts of alcohol, so that antibiotics and beer or a glass of sparkling wine are also permitted in some cases. But which antibiotics are banned? Those that contain the following active ingredients:

The fact that sleeping pills and alcohol can have side effects is actually nothing new. However, many are not aware of the serious situation, because in some cases combining the two can even lead to death. What happens when you drink alcohol and take tablets that are supposed to promote sleep?

For example, barbiturates, which are no longer used as sleeping pills, but are prescribed for epilepsy, stop breathing after falling asleep when combined with alcohol, which means death as a result. Some antidepressants and alcohol are also a bad combination. Other agents whose effects are strengthened by alcohol are:

Taking tablets and alcohol for high blood pressure can not only lead to irregular heartbeat (Arrhythmias) to lead. Fatigue / sleepiness, dizziness and fainting can also be the result, since alcohol increases the effect and the pressure drops more than intended. Therefore, do not drink alcoholic beverages if you are taking ACE inhibitors and beta blockers such as the following antihypertensives:

With the chest tightness (Angina pectoris) is a circulatory disorder of the heart that is treated with medications that contain nitroglycerin. Such so-called nitro preparations relax the heart muscles so that the heart can consequently be better supplied with blood. When alcohol and drugs containing nitroglycerin are combined, it can cause a racing heart, sudden changes in blood pressure, drowsiness and fainting.

Nowadays, people take painkillers almost like candy. For headaches and migraines, back pain, muscle pain and similar complaints, you have them at hand. But what happens when you take painkillers with alcohol? Of course, this depends above all on the exact medication, because they all contain different and more or less strong active ingredients, some of which are prescription-only and pose a risk of addiction.

Aspirin, for example, attacks the gastric mucosa, which is increased in combination with wine, which is acidic. Beer would be a better choice. Ibuprofen, like aspirin, is acidic, but should not be combined with alcohol at all.

In serious cases, however, sleepiness, dizziness, memory loss and abnormal behavior can occur. This is especially true for opioids that work directly in the brain. Combining alcohol and painkillers of this type can also impair breathing and motor skills. The risk of an unwanted overdose as a result of these side effects should not be underestimated if you take painkillers and alcohol together. Avoid alcohol and medications that are opioids, such as:

Some cholesterol-lowering drugs contain statins, which do not cause any dangerous interaction with alcohol if it is only drunk from time to time. However, regular consumption should be avoided, as this damages the liver and drastically increases the risk of liver damage. This can also cause stomach bleeding and itching.

Some diabetes medications can cause blood sugar to drop dangerously when combined with alcoholic beverages, followed by nausea and hot flashes. The active ingredient metformin, together with alcohol, even dangerously upsets the acid-base balance, which can lead to shock.

Blood thinners are designed to prevent blood clots from forming. Even occasional drinking of alcohol despite taking a blood thinner could already cause internal bleeding. Frequent drinking can either have the same effect or even the opposite or what the blood thinner is supposed to prevent – the formation of blood clots is increased, which in turn drastically increases the risk of heart attacks and strokes.

Furthermore, it should not be forgotten that you can quickly fall and bump into each other when drunk. The bleeding inhibitor taken can make it more difficult to stop bleeding injuries. This is even more dangerous if there is an internal injury with bleeding that is not immediately recognized. The following medications are blood-thinning, among others:

Pulling a muscle while exercising or sore muscles after exaggerated training: A muscle relaxant is quickly resorted to. For many, this is nothing unusual or even almost everyday. And their effects are mostly greatly underestimated, especially in combination with alcohol. But then not only can they cause drowsiness, dizziness, abnormal behavior, memory loss and even seizures, they can also slow down or otherwise impair breathing and be life threatening. Therefore, generally avoid combining alcoholic beverages with muscle relaxants and be very careful with the following: 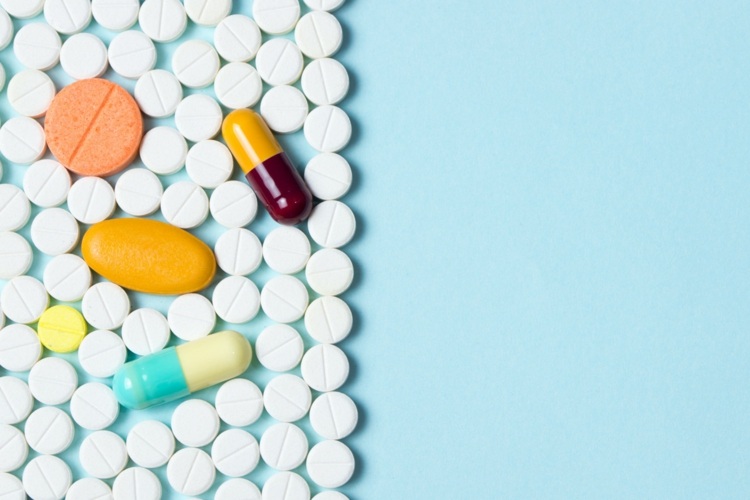 What happens when you take tablets and drink alcohol mainly depends on the type of tablets or the active ingredients they contain. Thus, alcoholic beverages interfere with the effect of the tablets in some cases, while in other cases they increase them or even cause side effects. This applies not only to prescription drugs, but also to over-the-counter medicines that can easily be obtained in pharmacies.

For this reason, the questions of how to tolerate ibuprofen and alcohol or aspirin and alcohol are frequently asked. We have already mentioned some over-the-counter medications, but would like to list them again below with a few others:

The extent to which alcohol and medication have a negative impact not only depends on the type of medication or its active ingredients and the amount of alcohol, but also on factors such as gender, age and other medications that one takes on a daily basis. Therefore, the side effects mentioned are only an orientation and warning and should under no circumstances replace the medical advice.

For the same reasons, you should not only read the package leaflet carefully, but also assume that even if it does not mention alcohol, this is by no means a guarantee that no negative side effects are to be expected. If you are not sure you should be sure to get your doctor's advice!

The post alcohol and medication: side effects depending on the type of medication & lists of prohibited substances appeared first on Deavita.com | Living ideas, design, hairstyles, make-up, lifestyle, health and beauty tips.